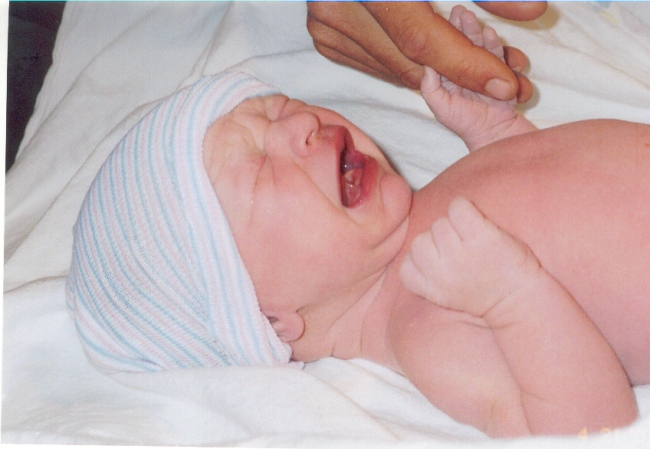 According to the CDC rates of circumcision performed on newborn males in the U.S. declined sharply from 56 percent in 2006 to just 33 percent in 2009. The decision to circumcise a newborn so that he will fit in with peers in the locker room is no longer valid.

Circumcision in the U.S. has been a controversial and hot button topic for years. Circumcision rates in 1970 were almost 90 percent. The credit for this incredible decline might be due to the ever increasing number of parents who are educating themselves about this unnecessary cosmetic procedure before making a choice.

No national health organization in the world recommends circumcision for healthy male infants, not the American Academy of Pediatrics nor the American Medical Association. Nearly all European males are intact, with no epidemic of penile health problems, thus discrediting the American held belief that circumcision is healthy.

Another myth is that circumcision removes just a little flap of skin. The truth is that roughly 15 square inches of tissue is removed, amounting to anywhere from one-third to one-half of the skin covering a normal penis. Removed with this tissue are 240 feet of nerves and up to 20,000 nerve endings.

Activists spreading the word about circumcision call themselves intactivists. Their argument is that an intact penis is the default and natural condition. Don’t fix it if it ain’t broken. Risks and side effects can include hemorrhage and even death. The foreskin that is removed actually has a function. In fact, it has many functions. Read about them here.

Another argument against routine newborn circumcision is consent. An infant can’t give it. It’s his body; he should make the decision when he’s older. Some circumcised men have even opted for foreskin restoration.

Added on 1/2/14: As it seems I have stirred up a bit of a controversy, are circumcision rates actually falling? I have added a follow up to this post here and are there any benefits to it? Here’s the answer to that.

Angela is a writer and poet from the backwoods of Texas. She's many other things as well, including a wife, mother, liberal, feminist, mostly straight, LGBTQ supporter, avid reader, outdoor lover, a grand multi-Para and a self proclaimed starfish flinger. She has thoughts and opinions that could be construed as many things, including being seen as a crunchy, tree hugging hippie. Religiously speaking, she’s more Pagan than Christian leaning but basically a secular type. She has been busy producing free range children since 1991 and is currently engaged in raising wild things. She has walked through fire; therefore she may occasionally leave sparkles in her wake. Early Childhood is her passion, as evidenced by the seven children that call her mommy. She considers herself to be a bit of an attachment parent, aka rebel, trouble maker and pot stirrer extraordinaire. Examples of her bucking the traditional system include co sleeping, extended breastfeeding, unschooling, engaging in gentle discipline (i.e., not spanking) and leaving kids intact. She would like to remind her readers that mommin ain’t easy! Professionally speaking, Angela is an early childhood professional, trainer, conference presenter and writer. She holds degrees in Psychology, Sociology and Business. She has worked in the field of Early Childhood Development since graduating from Texas A&M in 1998. She is certified as an Early Intervention Specialist and has worked as both a Specialized Skills Trainer and Family Service Coordinator for several Texas ECI (Early Childhood Intervention) programs. After obtaining her MBA from Texas Woman’s University, she decided to stay in the field of Early Childhood and move into management. She served as a Team Lead, Program Coordinator and Site Director at LaunchAbility (Previously Special Care and Career Services). She has presented on numerous child development issues, in a variety of venues, most notably at a conference given by the Brazelton Institute. She has been a certified Nurturing Program instructor and a trainer for the Child Care Champions program. She is a member of the honor societies of Phi Kappa Phi, Epsilon Omega Epsilon and Sigma Beta Delta. Past and current affiliations include National Organization of Women, National Association of Professional Women, North Texas Association of Early Intervention Specialists, Burleson County Community Resource Coordination Group (Vice President) and First3years (continuing education committee). She served as Vice President of fundraising for her son's PTO before branching out into homeschooling. She is the founder of the North Texas Home-school Gay Straight Alliance. She holds an endorsement as an Infant Mental Health Specialist from First3Years (formerly North Texas Association of Infant Mental Health).  She has published articles in the First3Years journal, written as the Early Childhood Examiner for Examiner.com and been a contributor to sites such as Liberal America, The Bump, Modern Mom, Global Post, and Live Strong.

This work by Angela Harrison is licensed under a Creative Commons Attribution-NonCommercial 4.0 International License

Daydreaming as a profession

Daydreaming and then, maybe, writing a poem about it. And that's my life.

Whereabouts of a Wanderer's Soul

"A Word of Substance"

"Writing is how I train a searchlight into the darker corners of my self and the world, as am sure I'd never do otherwise." - Pico Iyer

A Journal Of Our Ruminations, Illustrations & Aesthetics.

If you want to be a hero well just follow me

Researching the Jernigan Family from England to America

Research into the family of Captain John Blakeney

The creative fiction of Baart Groot.

A Collection of Short Stories

A blog by Dr. Abhinav Majumder

Table 41: A Novel by Joseph Suglia
stumble upon serendipity

Nothing haunts us like the things we don't say

Oh! Take a shit, read a story. - My Mother on flash fiction

My HostGator Blog
The Cat's Write

Welcome to my world.

reflections on a passing life

Where Myths Are Maybe Real

The Casual Way to Discuss Movies

Come for the flash fiction and short stories. Stay for the sense of wonder at deriving meaning from weird symbols on a screen

Tales of humour, whimsy and courgettes

So, You Think You Can MOM?

The daily adventures of an aspiring domestic goddess.

Life is a journey. A journey that never ends. One that is always moving forward. My journey is filled with its ups, it's downs, bumps in the road and a great many obstacles. It is here, in this moment that I wish to be open and vulnerable with all of you.

Musings and books from a grunty overthinker